Astronomical Clock in Prague visits thousands of tourists and locals every day. They took photos and videos without knowing what is so special about this mechanism. Let me answer the most common questions about the Clock. I hope it will help you to appreciate it much more. By the way, Czechs call Astronomical Clock “Orloj“.

Did you know? Although many people want to read the time, we must not forget, that the primary purpose was not to measure the time. The Clock is a miniature model of the universe.

Question no.1: How old is the Astronomical Clock

To be honest, we do not know how old the Clock is. The earliest written evidence is from 1410. The tower of the Old Town Hall is from 1364. So, the Astronomical Clock is the part of the tower of the Old Town Hall between these years. Actually, around 1400 the first mechanical clock appeared on the tower. We can take this as a foundation for the Astronomical Clock.

Did you know? Prague’s Astronomical Clock is not the oldest clock. The very first mechanical clock is from the 13th century and you can find it in the Italian city of Padua. The world’s first clock might be a special Antikythera mechanism from ancient times. Even it did not tell you the time, predicted astronomical and astrological positions. Yet, archaeologists still do not know how exactly the mechanism worked.

Question no. 2: Is the Prague Clock cursed?

Ever since the Clock is in Prague, many stories tell you about the curse of the Astronomical Clock. The most famous is that of the blinded horologist who shut down the Clock. His name was Jan Růže, known as master Hanuš. Prague councilmen did not want him to work on a different clock somewhere else. So, they order some men to break into his house and blind him. Even without his eyes, master Hanuš knew his machine by touch. Thus it was easy for him to damage it. As the legend continues, once the Clock stopped, the heart of Hanuš stopped as well. Since then his ghost guards the Clock.

Question no.3: Who made the Astronomical Clock?

As it was already mentioned, the oldest written evidence about the Astronomical Clock is from 1410. It carries the names of Clock’s designers: Mikuláš from Kadaň and Jan Šindel.

Mikuláš, the clock master, received a very generous reward, such as a new house and annual income. Jan Šindel, the astronomer, provided all the necessary calculations. Actually, the calculations are not so complicated and Mikuláš would do it on his own.

There are many other people connected with the history of the Astronomical Clock. Jan Táborský provided the first technical description. He took care of the mechanism in the 16th century.

Jan Růže, already mentioned as master Hanuš in the legend, took care of the Clock in the 15th century. He likely added the very first moving figure, the skeleton, fixed some parts of the mechanism and added the calendar dial. He worked quite a lot on the Clock, so it is the reason why many documents mentioned him as a creator of the whole mechanism.

Petr Skála is the current clock master. He provided the general restoration in 2018. 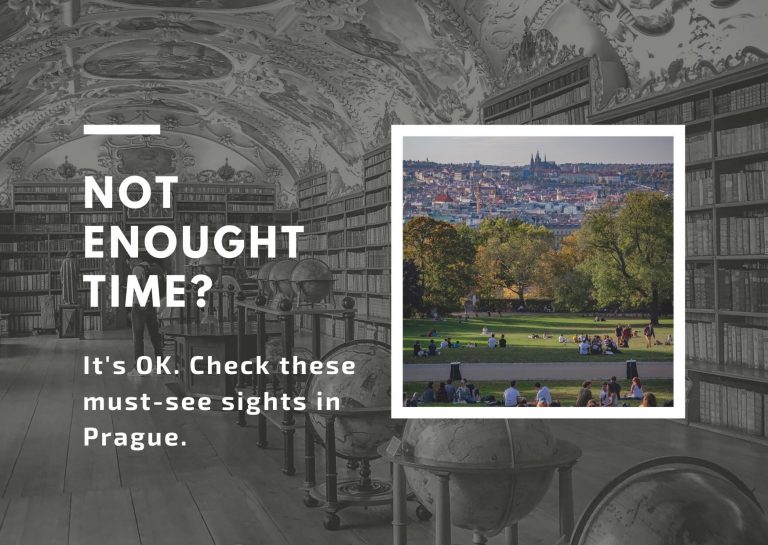 Question no.4: How does it work?

There are two main dials, the upper is the astronomical dial and the lower is calendar dial.

Paintings by Josef Mánes decorates the large golden calendar plate. This is one of the newer parts of the Clock, from the 19th century.  Twelve circular allegories of months correspond to the smaller medallions of the zodiac. In the centre part is the emblem of the city of Prague.

The upper astronomical dial shows the times. Moreover, it also shows the position of different elements, such as the moon or sun. This one looks more complicated to read, but as you will see later, you only need to know where to look.

There are also statues of the Twelve Disciples of Jesus Christ, in the upper blue windows above the dials. Their role is to look out of the windows during the show that is on every hour.  This is the reason, why there are so thousands of people gathering on the precise moment.

Question no. 5: How do you read the Astronomical Clock in Prague?

Prague’s Astronomical Clock allows you to read four different times. Some of them might look very strange for us today and some are not even used anymore. Even so, it’s quite unique to have these different times together on one mechanism.

Babylonian time is the oldest time shown on the astronomical dial. Babylonian time divides the time between sunrise and sunset. That’s why there are only 12 hours, displayed by black Arab numerals. Moreover, each hour is governed by its planet. Astronomical Clock in Prague is the only clock in the world where you find this time.

Old Bohemian time is much easier to read. The day has 24 hours and starts from the sunset (not from midnight as today). It was used in the Middle Ages, brought by the Emperor Charles IV. and used in many other countries. Sometimes you can actually find another term of the time, Italian. To read what time it is, look for the golden hand and Gothic numbers displayed in the outside black circle.

German time, or Central European time, is the time we use today. The day and night are divided into twelve equal hours, without showing the minutes. The Astronomical Clock contains Central European times since 1912.  Yet, only from 1948 working right. Look for the golden hand and Roman numerals.

Star time or sidereal time is the last that you can read on the Clock. It has 24 hours and is 4 minutes shorter than a solar day. Look for little golden star and Roman numerals.

Question no 6: Does the Astronomical Clock show the Sun and the Moon?

Astronomical Clock shows the position of the Sun and the Moon as well. Their symbols are attached to the astronomical dial and move around it through the day and night.

Moon is travelling on the ecliptic line of the Clock, counterclockwise. Its orbit takes 24 hours, 50 minutes and 28,3 second. During this time, the silver/black Moon makes one complete rotation around the dial. Actually, the reason why half of the Moonball is silver and the other one black is the Lunar phases. As the Moon travels through the Clock, it also rotates in the way to show the lunar cycle. Once there is a full moon, you can see the silver part of the ball. As the Moon is disappearing, the Moonball rotates to show more of the black side until it’s all black.

Sun, displayed as the golden sun, is travelling through the Clock, clockwise.  Different colours of the astronomical dial represent the parts of the day. So, the blues stands for the day, red on the left for sunrise and the red on the right is sunset. The black colour, opposite the blue, is night.

Question no. 7: What is the zodiacal circle for?

Zodiac circle is the smaller dial within the bigger astronomical dial. It’s divided into twelve zodiacal signs and connected with the position of the Sun. So, as the Sun travels around the astronomical dial, it is also attached to the current zodiacal sign. You can also tell when are the summer and winter solstice, or autumn and spring equinox.

Did you know? The current zodiacal circle is from 1987 and designed by the present Clockmaster.

Question no.8: What is the Calendar dial for?

The very first calendar dial was from the 15th century, added by master Hanuš. Today, we know about its existence only from several paintings and some old documents. The current dial, designed by the Czech artist Josef Mánes, is from the 19th century.

Josef Mánes depicted the pictures of the months as medallions. They show the typical activity for the month. For example, in January, the family celebrates the birth of a new life. In February the man warms his feet over the fire and women brings the new wood for the fire. In March, a farmer ploughs a field and in April the family plants a new tree. Two lovers celebrate the May and in June they cut the grass.

In July the two women cut the wheat and child brings them water to drink. The harvest continues in August when a young boy helps two women. In September, the farmer sows a field with a help of two horses. October is the time to harvest wine and in November the family picks wood for the winter. In December, the family attends the pig-slaughtering, to have meat for the winter.

Did you know? The original of Mánes desk is in the City of Prague Museum.

Question no. 9.: What is the Astronomical Clock show?

Imagine yourself standing on the Old Town Square. It’s almost at the top of the hour. You, and thousands of other people, are standing in front of the Astronomical Clock. And then, when the bell from the church nearby announces the top of the hour, it starts.

Firstly, the two blue windows above the astronomical open and the procession of the Apostles sets in motion. They were the part of the Clock from the mid 18th century. But, these statues, that you can admire today, are from the 20th century.

Note: We do not know when exactly the statues of the Apostles are on the Clock. They disappeared and reappeared back several times in history. Moreover, statues were destroyed during the fire of the Old Town Hall in May 1945. They were replaced by the current copies in 1947.

While the Apostles walk, other figures next to the astronomical dial set in motion as well. They are Vanity, Avarice, Death and Turk. They slightly move either with their hands or heads.

Death is the most interesting figure. She has sandglass in one hand and rings a bell with the other one. Even more, with a closer look, you notice that Death is smiling. It’s a symbol of the blissful death.

Apostles in the left window:

Apostles in the right window

Rooster, that you can find above the blue windows, whose crowing signals the end of the show.

Question no.10: When is the best time to see the Clock?

The best time to see the Astronomical clock is in the morning. Especially, when the tourists season hits its peak, you have to be smart and arrive early. 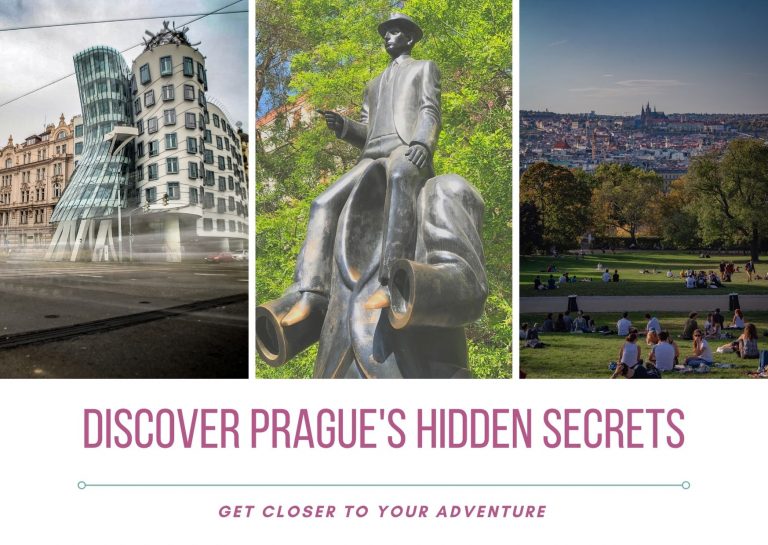