The Legacy of Charles IV. in Prague

Father of the Homeland, the greatest Czech, or just simply Emperor Charles IV. Walking through Prague it is almost impossible not to “encounter” him or his legacy at least. As the Czech king and the Emperor of the Holy Roman Empire, he still is an icon of Prague, Czechs and the whole country. But why?

Charles was born in 1316 to John of Luxembourg and Eliška Přemyslovna. His original name was Václav, in honour to the king Wenceslas (from whose line his mother came from). Once he was seven years old, he was sent to the French court to get a proper education (and also change the name to Charles, this time in honour to Charles the Great). He made several friends there, who would shape his destiny afterwards. One of them was a man who later became Pope – Clement VII. Also, in France, he met his first wife, beautiful Blanche of Valois. Though both of them were only seven years old, they married, and united Czech and French kingdoms. Unfortunately, Blanche died in her thirties, in 1348, and Charles decided to marry other princes. Ultimately, he had four wives altogether:

After some time Charles returned back to Bohemia. In 1346, when his father died, Charles inherited the title King of Bohemia and was also elected by the prince-electors as the King of the Romans. He chose Prague as the capital of his Empire and started a big development in this city and country as well. 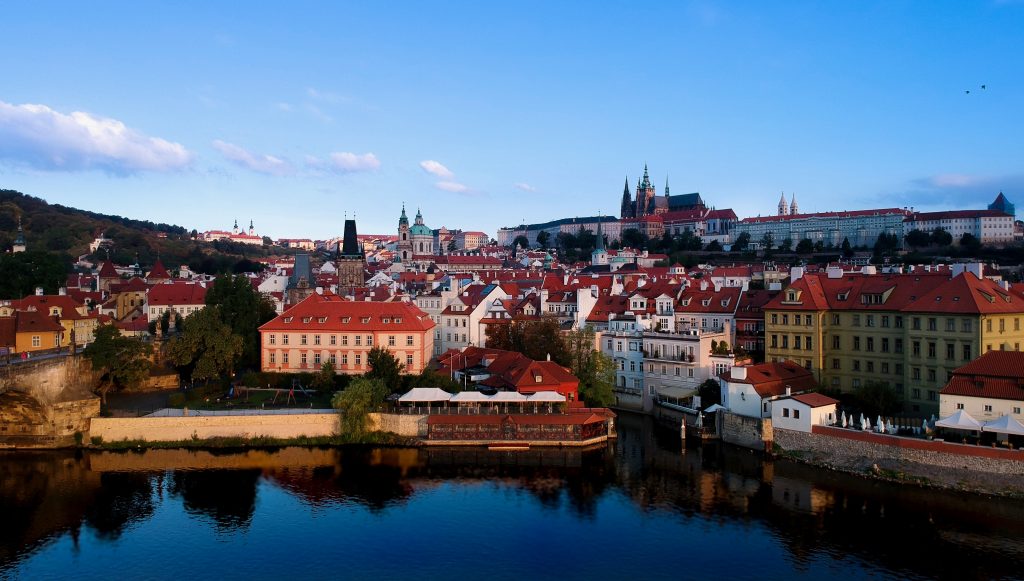 Charles achieved many steps in his long life that still influence our country or just Prague, even today. What are the most important?

1) The promotion of Prague bishopric to an Archbishopric

The bishopric of Prague was established in 973 but only in 14th century elevated to an archbishopric. By doing so, Czech countries were removed from the jurisdiction of an archbishopric in Mainz. The first archbishop was Arnošt of Pardubice, Charles’ close counsellor and advisor. In the same year, the construction of St. Vitus Cathedral in Prague Castle had begun, which was to serve as a new seat for the archbishop.

The oldest university in Central Europe was founded in 1348 and ranks among the world’s best contemporary universities. The model for Prague’s university was the University of Sorbonne, with four faculties. Today, there are 17 faculties at the University, mostly based in Prague. It’s not just one campus, but many building throughout the city of Prague and in the other two cities in the Czech Republic.

The New Emperor of Holy Roman Empire decided to make Prague as his seat, as we have mentioned. That’s why he had invested a lot of effort into its development. And many of those traces we can still see today. Charles did a lot for Prague, and here is a list of some you can easily spot or notice just by walking through the city.

4) Legacy outside of Prague

Charles was the king of the Holy Roman Empire, so his steps can be found all over Europe. Even though his name is not being mentioned too often elsewhere, he was truly one of the greatest kings at all. What can you visit outside Prague and maybe even outside of the Czech lands?

Charles IV died from pneumonia in 1378. His son from the third marriage, Wenceslaus, became the new King of Bohemia and also Emperor-elect of the Holy Roman Empire. History knows him as Wenceslaus IV. Although Charles was an amazing king, he was not very good father-teacher, so his son was in big difficulties to reign such a big kingdom. Yet his story might be probably a theme for another article 🙂

You can explore some of the mentioned sites with me on my tours – check PragueJourneys.